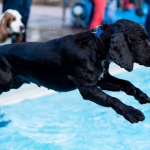 At the end of the swimming season, Sandford Park Lido in Cheltenham open up their gates for dogs to have a dip before they clean and close the pool for the winter. One overcast Saturday in the middle of October, we bundled our two year old Cockerpoo into the back of the car and equipped with a bag full of towels and wetsuits, we headed south to Gloucestershire.

Arriving at the pool carpark, we noticed a shambolic queue of suitably clad humans and a variety of waggy-tailed canines straining at there leashes. Once through the turnstiles, imagining a very excited Rufus  would be desperate to get into the water, we hurriedly got changed.

It quickly became apparent that Rufus was not so much excited, as nervous. After much ineffective cajoling, he would not get into the pool. Eventually I had to pick him up and carry him in, where he clung on to me like a shy toddler. Once released, he managed a calm looking doggy paddle, snout just above the water, but was keen to get to the side and onto dry land.

Maybe swimming is not for everyone. It is good to know Rufus can make his way through deep water if he gets himself into a tricky situation but for the time being I think he is happy just chasing squirrels through the woods.